COVID-19 in Prisons: Two Charts Show the Virus Spreading at an Alarming Rate

As daily COVID-19 cases hit record levels across the U.S. this week, the infection rate among people incarcerated in state prisons continued to dramatically outpace that of the general public.

The following two charts show the latest trends and analysis from The Council of State Governments Justice Center:

1. The COVID-19 infection rate for incarcerated people last month reached more than four times that of the general population. 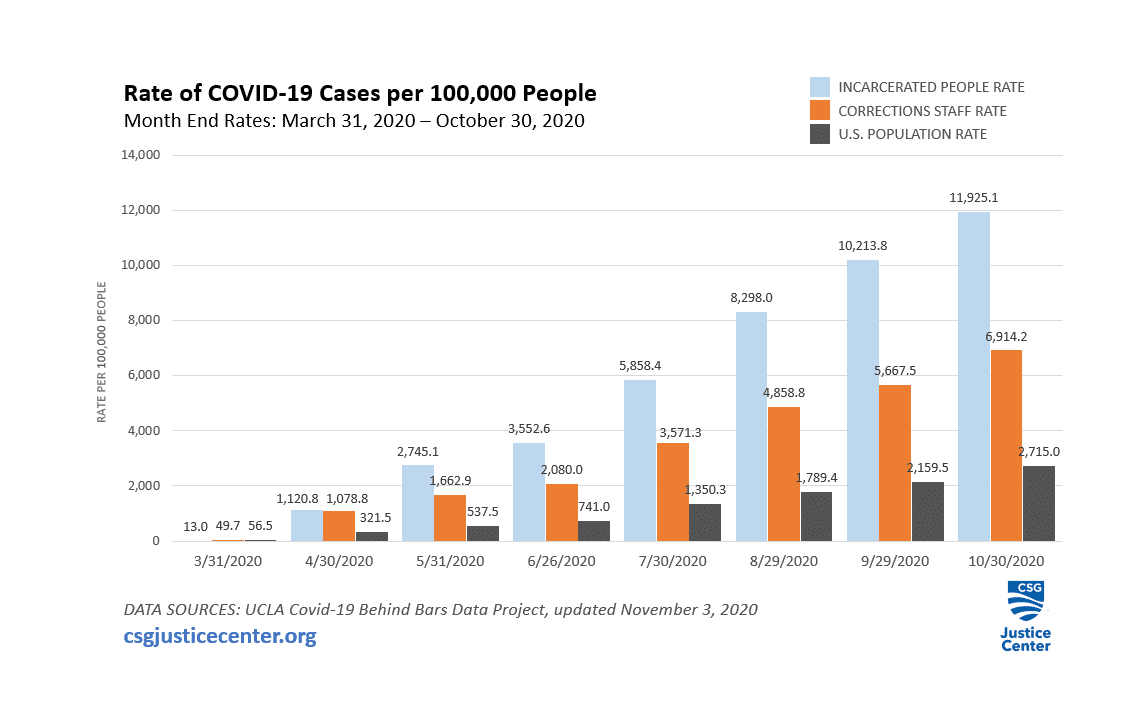 From April through June, the pace of COVID-19 infection rates among people incarcerated in state prisons largely mirrored that of the general public. This took a turn at the end of July as the virus began to spread more aggressively behind state prison walls.

While incarcerated people account for the majority of infections in prisons, the latest data also show that corrections staff are impacted at more than 2.5 times the rate of the general population.

2. This week, the number of COVID-19 cases reported in state prisons reached its highest peak since the pandemic began. Nearly every week since April, the number of COVID-19 cases reported by state prisons has hit a new peak—and showed no indication of slowing down.

Stay up to date on COVID-19 in state prisons by subscribing to our weekly newsletter, Justice Briefing, and check out our website for additional COVID-19 resources.

Angela Gunter
Senior Research Associate, Research
Angela Gunter’s work primarily focuses on the data monitoring of Justice Reinvestment projects during Phase II policy implementation. She supports various ad hoc research efforts, including the 2014 Recidivism Reduction report, the Reentry and Employment pilot program, and the evaluation
...
of the pretrial process for Bexar and Dallas Counties. Angela began her career in criminal justice in 2001 at the Texas Criminal Justice Policy Council, where she worked on forecasting the impact of juvenile justice policy options for the Texas Legislature and creating monthly projections of bed capacity for juveniles. Angie later joined the JFA Institute and conducted research on different aspects of the criminal justice system, including parole, probation, and juvenile justice in Texas, Kansas, and Puerto Rico. In 2008, Angie worked with the CSG Justice Center as a consultant on various projects, including mental health IT development for the State of Alaska. Prior to her career in criminal justice, Angie worked in the private sector as a business systems analyst where she oversaw the project lifecycle of custom-built software applications. She received her BA from Rice University and her MPA from Indiana University.
Read More
Brenna Callahan
Public Affairs Manager, Communications and External Affairs
Brenna Callahan drives strategic media relations and public affairs to advance organization-wide initiatives. Prior to joining the CSG Justice Center, Brenna managed national communications for a civic engagement nonprofit. She previously developed and managed a communications and economic equity policy
...
portfolio for Mayor Marty Walsh’s Office of Women’s Advancement at the City of Boston. Brenna also worked in both development and operations roles at the Boys & Girls Clubs of Boston, where she managed agency-wide programming. Brenna earned a BA in English from Boston College and an MPA at Suffolk University.
Read More
You might also be interested in How One County Jail Maintains a 30% Population Drop