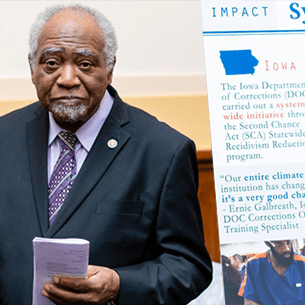 As policymakers continue to focus on the importance of safe and successful reentry among people leaving prisons and jails, and with President Trump designating April 2018 “Second Chance Month,” a group of national leaders paused last week to reflect on the impact of the Second Chance Act—a law passed in 2008 that has supported work to improve reentry outcomes in communities throughout the country.

On April 17, current and former members of Congress and advocates who were instrumental in the effort to pass the Second Chance Act gathered on Capitol Hill with supporters to celebrate the tenth anniversary of the landmark legislation. A bipartisan group of Congressmen—including Danny Davis (D-IL), Mark Walker (R-NC), Doug Collins (R-GA), Bobby Scott (D-VA), and Jim Sensenbrenner (R-WI)—were all honored for their crucial roles in pushing the bill forward a decade ago. Other honorees included Pat Nolan of the American Conservative Union Foundation’s Center for Criminal Justice Reform and Gene Guerrero of the Open Society Foundations’ Crime and Violence Prevention Initiative.

Since it was enacted, the Second Chance Act has supported 843 local, state, or tribal government agencies and nonprofit organizations from 49 states to help improve reentry policies and programs, which have served an estimated 164,000 people to date.