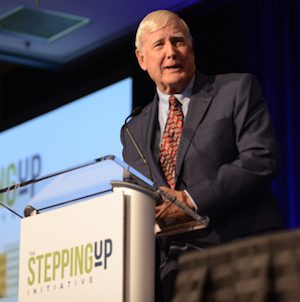 A two-day summit bringing together almost every county in California was held this week as part of Stepping Up, a national initiative to reduce the number of people with mental illnesses in jails.

Stepping Up: The California Summit hosted teams representing 52 of the state’s 58 counties to discuss the crisis of mental illness in jails, which plagues communities across the nation. Those teams were comprised of key decision-makers in each community, including elected leaders, jail administrators, law enforcement officials, judges, and others with the ultimate goal of establishing a system-wide plan, or refining an existing plan, to lower the population of incarcerated people with mental illnesses.

“Our county jails are struggling with inmates who have mental illnesses and county leaders from across the state are attending this summit to talk about this critical issue,” said San Diego County Supervisor and National Association of Counties Second Vice President Greg Cox. “Counties are making great progress on this issue, but we have a lot more to do to make sure people with mental illnesses get the care and treatment they need.”

The work among county teams and national experts at the summit is framed by a new paper released this week by Stepping Up, which poses six key questions community stakeholders must answer in order to put them on a path toward establishing a comprehensive strategy to impact the problem. This roadmap for local leaders addresses key elements of a successful plan, including the need for screening and assessments for mental illness upon admission to jail; establishing a baseline of data for counties to follow; tracking progress on key outcomes, such as recidivism rates; and ensuring connections to treatment.

Stepping Up: The California Summit brought together 398 people representing 53 of the state’s 58 counties. Those attendees included:

“As someone who oversees a county jail, I know how important it is to divert mentally ill people from custody into community-based treatment whenever possible, and to provide humane and effective treatment for those seriously mentally ill offenders who must remain in jail,” said Bill Brown, Santa Barbara County Sheriff and vice president of the California State Sheriff’s Association. “Stepping Up brings key stakeholders together and provides a step-by-step framework for effecting positive, system-wide changes, with the goal of leaving no one with a mental illness behind. It is a vital process for every county to go through.”

Many California communities have already taken steps to address this crisis. In a 2015 survey funded by the California Endowment, nearly half of the state’s 58 counties reported having locally coordinated efforts to lower the number of people with mental illnesses in their jails. Even more have worked across agencies to address this issue through their Community Corrections Partnerships, grant applications, and new opportunities available though the state’s new 1115 Medicaid waiver. Despite these advancements, leaders from nearly every county also reported in the survey that there are more people with mental illnesses in jails than there were five years ago.

“The issue of mental illness in jails extends well beyond the borders of California. The population of people with mental illnesses in U.S. jails is three-to-six times higher than that of the general public,” said Dr. Renee Binder, past president of the American Psychiatric Association. “Jails and prisons were never designed to provide the appropriate care and treatment people with mental illnesses need. Psychiatrists her in California and across the nation are committed to helping find a solution to this problem.”

Stepping Up launched in May 2015 as a partnership between The Council of State Governments Justice Center, The National Association of Counties, and The American Psychiatric Association Foundation. The initiative has rallied more than 323 counties, representing nearly 35 percent of the U.S. population, to commit to actions toward reducing the number of people with mental illnesses in jails. Those counties include 26 California counties that were represented at the summit.

“County leaders across the state have shown a willingness to address this issue, both to address the human toll of this issue, and also the toll on taxpayers,” said state Sen. Jim Beall, Santa Clara County. “The state has a vital role to play in making sure counties have the resources they need to succeed.”